Wyoming marijuana legalization activists are forced to turn their aim to 2024, a New Mexico bill to legalize fentanyl test strips is coming, and more.

Wyoming Activists to Focus on 2024 for Decriminalization, Medical Marijuana Initiatives. Having decided they cannot gather enough voter signatures soon enough to get marijuana decriminalization and medical marijuana initiatives on the 2022 ballot, marijuana reform activists are turning their attention to 2024. They cited poor weather conditions, the pandemic, and slow action on their petitions by state officials for coming up short for this year. They would have needed 41,776 valid voter signatures by next month to make the 2022 ballot, and only have about 30 percent of that number at this point.

Mississippi Legislature Convenes, Is Set to Take Up Medical Marijuana. The legislature is back in session, and medical marijuana is on the front burner. Voters approved medical marijuana at the polls in November 2020 only to have the results nullified by the state Supreme Court, and lawmakers have vowed to enact the will of the voters by passing a medical marijuana bill. It was supposed to have been done in a special session late last year, but Gov. Tate Reeves (R) never called it because he was unsatisfied with the proposed legislation. Now, the legislature will give it another try.

Psilocybin Clinical Trial Confirms Safety of Group Psychedelic Sessions. A new study published in the The Journal of Psychopharmacology found no detrimental effects from administering psilocybin in a group setting. The study reported the results of a large clinical trial checking on both short- and long-term effects of administering the drug. While researchers in the 1960s studied the effects of psychedelics when administered in a group setting, but since interest in medicinal applications of psychedelics has rebounded in recent years, almost all research has focused on the administration of the drugs to individuals.

New Mexico Attorney General to Push Bill Legalizing Fentanyl Test Strips. Faced with a 25 percent increase in drug overdose deaths from 2019 to 2020, Attorney General Hector Balderas (D) says he is getting behind pending legislation to make fentanyl test strips legal. Under current state law, they are considered drug paraphernalia. State Rep. Tara Lujan (D-Santa Fe) says she will file the bill this week and that it also has the support of the governor and the state health department.

Abu Dhabi Court Sentences Two Filipinos to Death for Drug Dealing. The Abu Dhabi Criminal Court has sentenced two unnamed Filipinos to death after convicting them of possessing and selling "narcotics and psychotropic substances." The death sentences contradict the position of the UN Office on Drugs and Crime, as in this 2019 statement: "As part of the United Nations Secretariat, the United Nations Office on Drugs and Crime (UNODC) does not support the use of the death penalty. Just last December [2018], more countries than ever before – 121 Member States – supported a General Assembly resolution calling for a moratorium on the use of the death penalty. The three international drug control conventions, which form the foundation of the global drug control system that has been agreed by nearly every country in the world, cannot be used to justify the use of the death penalty for drug-related offences alone. Application of the death penalty may also impede international cooperation to fight drug trafficking, as there are national laws that do not allow the exchange of information and extradition with countries which may impose capital punishment for the offences concerned. The dangers posed by illicitly-trafficked drugs are evident and lives are at stake. But use of the death penalty cannot provide durable solutions or protect people."

10 $WEED will be up for grabs everyday, never go without #weed again 💚🌳🔥 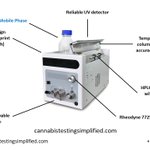 “All of these steps are incremental steps that lead to our production at BRC, and certainly all of our peers in the federally legal #cannabis industry,” George Hodgin, CEO of BRC, told Marijuana Moment.

The federal monopoly on cannabis manufacturing for research has finally been broken, with two companies telling Marijuana Moment this week that they&#…